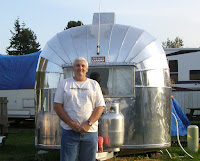 Back in 2010 as we began restoration on Moonshadow, our 1955 Airstream Overlander, we spent many hours researching on-line at the Air Forums and Airstream blogs by others who have done restorations, some experts and some amateurs like us. We became familiar with certain bloggers through reading posts and communicating on-line. Over time we've met a few in person and hope to meet more.


As plans for our Alaska trip developed we routed our return through Washington state in order to visit friends in the area and to meet one of these Airstream bloggers, Steve, whose work on his 22 ft. Caravanner, Island Girl, is inspirational, as is his story of over 20 years living on a 31 ft. sailboat with wife Pam. From 1996 to 2004 Steve and Pam circumnavigated the globe, wandering the world, having great adventures until Pam began to show signs of Alzheimer's disease. She did not want to give up their sailing life so they stayed on the boat but headed homeward. They continued to live on the boat at a marina in Blaine, Washington. Steve became Pam's full time caregiver. To keep himself busy he bought a 1957 Airstream Caravanner and dove into the restoration.

To learn more about Steve's project go to:
Steve’s Blog  -  My 57 Airstream Caravanner
Steve’s Air Forums thread  -  First She Had to Take a Ride on a Boat

In August of 2011 Steve, Pam and cat, Brissy, gave up their beloved boat to move into Island Girl as Airstream full-timers. It was at the RV park where they now live that we met them in the last week of October. 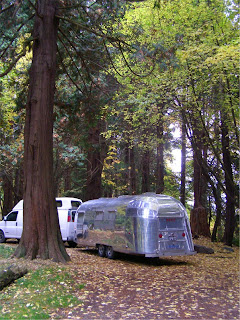 Steve recommended Birch Bay State Park as a good, nearby campground. We arrived around 2:00 PM. It was one of those seaside parks so thick with trees you can't see the water. We paid $21 for a space with no hook-ups. Though electricity and water were available we didn't feel we needed it for one night's stay. Leaving a folding chair to mark our site as taken, we headed for town, trailer in tow. We wanted Moonshadow to meet Island Girl. 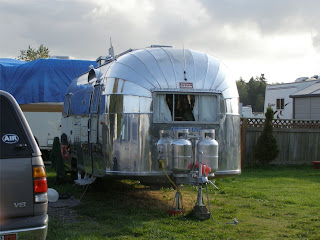 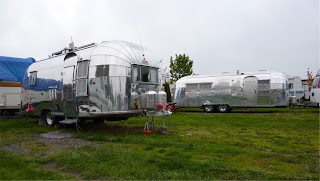 Island Girl and Moonshadow, side by side. Don't they look great together?

Steve turned out to be the nicest guy. Of course, talking Airstream is a source of great pleasure for him during a difficult stage of his life. The day of our visit a home care helper was there to care for Pam, giving Steve some free time. 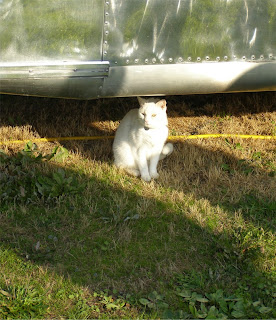 Brissy, the exotic cat from Brisbane, Australia, adopted while Steve and Pam were on their world travels. Until now, Brissy had only ever known life on the boat. Now she adapts to the Airstream and terra firma. 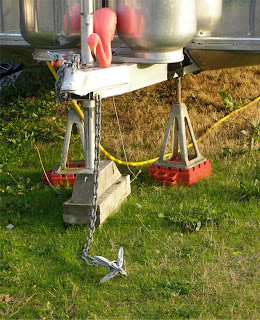 After over 20 years on a sailboat, Steve said he still feels a need to be anchored. 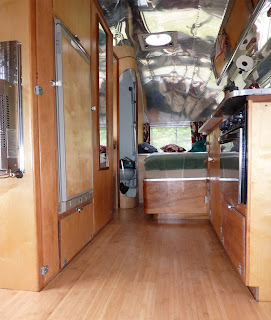 Steve gave us the tour, inside and out. Here you can see the beautiful job he did with bamboo flooring, rebuilt cabinets and other interior details of his own design. 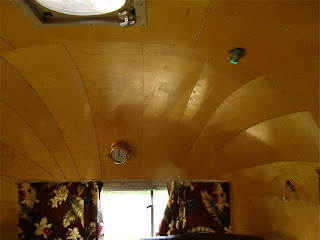 Steve told us that in 1957 Airstream started using molded plastic on the front interior, which he didn't care for. In order to get that vintage, 13 panel look, Steve covered the plastic with wood veneer to create a beautiful finish much like the interior of a boat. To further the boat theme, notice the green running light on the ceiling. Steve replaced  both the red and green running lights on his boat, keeping the orginals as tokens of good memories. He made creative use of them by mounting both on the ceiling of Island Girl above his and Pam's comfy recliners. 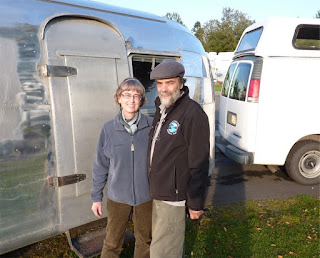 The next morning we returned for a round of espresso, a bit more visiting, photo ops and goodbyes. In the chill of a light drizzle, Steve greeted us in short sleeves and bare feet. We were bundled up in fleece coats, scarves and hats. Steve laughed at us and said in Washington if the temperature is above 45 degrees, it feels like summer. 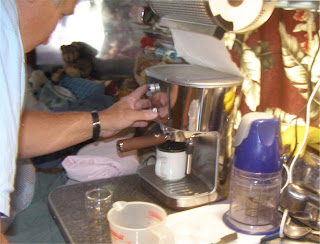 If you are a coffee lover, Steve makes the best cappuccinos ever.
We sipped our coffee in the cozy warmth of Island Girl
while Brissy went in and out, in and out. 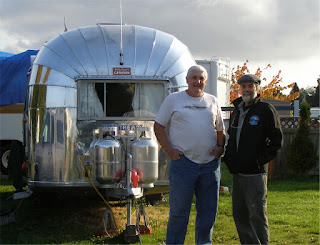 Saying goodbye...parting is such sweet sorrow. We hope one day Steve will hoist the anchor and visit Utah to see us and make use of our “courtesy parking.”

A montage video and tribute to our new friends, Steve, Pam, Brissy & Island Girl.
Click arrow in center to play video.
Thanks for a wonderful visit.

Our next post will wrap up the last leg of our trip and conclude with answers to the questions some followers have asked about details of travel to Alaska in an Airstream.
Posted by Sue and Spike at 1:31 PM