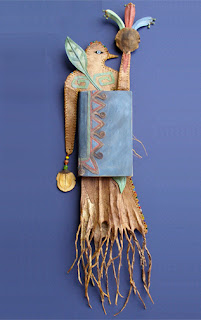 On exhibit in Santa Fe

Sue currently has work on exhibit at Vivo Contemporary Gallery in Santa Fe, New Mexico. She is one of eleven book artists participating it a “book art eVent” April 22 to May 10, 2011. Vivo Contemporary is an exciting new gallery located at 725 Canyon Road in Santa Fe. Along with the eclectic mix of Santa Fe artists represented, they include an innovative Book Arts Gallery within the gallery, “a hands-on showcase of book arts in an inviting atmosphere.”

Vivo's “book art eVent” is a regional invitational exhibit featuring artists from California, Colorado, Utah, Arizona and New Mexico. For those not familiar with the term “book art” here is an explanation from Vivo Contemporary Gallery's own website:

Pictured below are Sue's three pieces at Vivo Gallery with explanations of each. To see more, visit her website (see link on right listed under "Our Web Sites".) 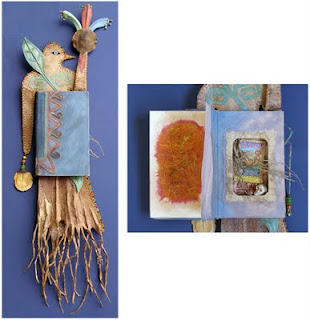 An “altered book” is an ordinary, usually worn out old book which an artist has altered in various ways to transform it into a work of art. Quite often altered books become free-standing (or hanging) sculptural pieces.

The book I used for “Un Amor de Mexico” was purchased at a library book sale in San Miguel de Allende, Mexico. Its original title, Un Amor, suggested to me the theme. I wanted it to represent my love of Mexico and Mexican culture, to be a container of fond memories.

The bird figure is an Inca dove, common in Mexico. She's made of sculpted Mexican bark paper, embellished with glass beads and jacaranda pods. The inside pages were transformed  into a small niche containing bits and pieces I collected along the way, each representing unique experiences. 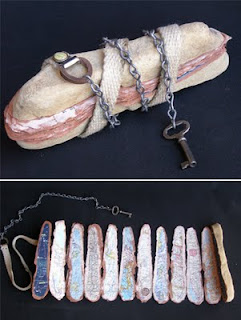 Where from, whither bound?
rock-book

I have made many books using split rocks for the covers. I find these rocks while on walks in  desert arroyos or along mountain streams. For this book I made special sheets of paper formed in the shape of the rock. The pages are assembled in a concertina fold that opens out to reveal cutout sections of a world map. Most of the map sections show a location I have traveled to, with the exception of the star maps, of course, not yet anyway. When closed this book is secured with a cotton strap and length of chain. 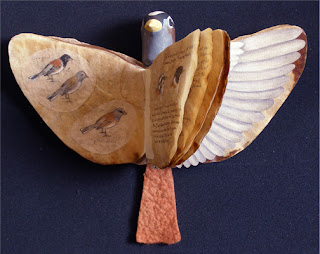 Sometimes the shape of a rock gives me an idea of what kind of book it should be. In this case, the rock reminded me of a bird's wing, so I turned it into a book about the birds who visit my feeders through the seasons. Since most are little brown birds, I decided to make the book in the form of a white-crowned sparrow, one of the most attractive sparrows, as sparrows go.

Slide show Inside pages of "A Bird Feeder's Year"

﻿Sue and I had been thinking of getting our Airstream back on the road for some time.  The old 6 volt brakes that came with the trailer served us well for many years with a voltage resister on the break controller, but the time had come to replace them. The easiest way seemed to be to replace the entire axel with new, modern brakes.  The next question was, where do we find new axles for a 55 year old trailer? At this point we had no idea.
﻿﻿﻿﻿
﻿﻿﻿﻿﻿﻿﻿﻿﻿﻿In May of 2010 I was in Canyon de Chelly, AZ on a painting trip, car camping in my mobile studio. I pulled into the campground near the canyon entrance to discover some 90 Airstreams taking up most of the park. It was a WBCCI (Wally Byan Caravan Club International) caravan touring the South West.
Being a proud Airstream owner I just had to talk to someone in the group. A man named Jerry Hall from was very helpful and gave me good information about what’s going on in Airstream circles these days. He informed me Airstream now uses Dexter Axles and directed me to a source. When I returned home I got on-line, joined the WBCCI and then VAC (Vintage Airstream Club). Through the VAC on-line forum I found someone with a trailer close to the same year as mine, Bill Kerfoot from who owns a 1954 Airstream double-door Liner. Bill confirmed what I had concluded, that replacing the old axles with new axles and brakes was indeed the best way to go. ﻿﻿﻿﻿﻿﻿﻿﻿
﻿ 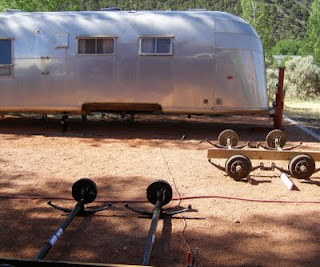 ﻿﻿﻿﻿﻿﻿﻿﻿﻿﻿﻿﻿﻿﻿﻿﻿﻿﻿﻿﻿﻿﻿Within two weeks we ordered new Dexter axles, they were delivered early in July. We began figuring out how to remove the old and install the new. To my surprise we discovered that at some point before I owned this trailer serious damage had been done to the center axle hanger that supports the equalizing arm on the curb side. I remember telling me about damage to the right side of the trailer that required a trip to the Ohio Airstream factory for repair. I wish I had paid more attention now. The photo below left, shows how off-center it was. It must have broken loose and was welded back in a misaligned position, almost a half an inch off. I always had bad wear on the right rear tire and now I understood why.
﻿﻿﻿﻿﻿﻿ 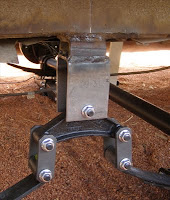 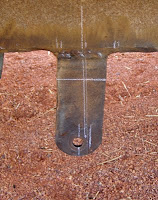 The center hangers that came with the new axles were shorter than those originally mounted to the trailer frame. I wanted to use the old hangers so the trailer would not ride any lower than it already was so my solution was to cut the misaligned hanger off at a point that would allow me to weld the new shorter hanger to it, thus maintaining the same height (photo above right). 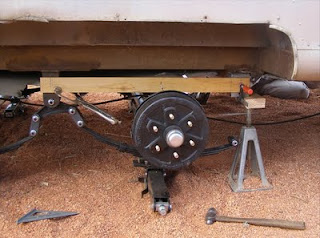 With the center hangers measurement from the hitch, now the same on each side,
I used a jig to ensure correct alignment of the front and rear hangers. 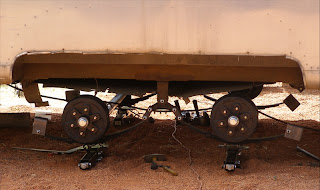 We loosened the belly skin in order to reach in
and shroud insulation from welding sparks.
﻿﻿

With help from my oldest son Paul and a fellow Airstream owner Steve Masefield we got the new axels mounted and a brake controller installed in the tow van which is my mobile studio, (more about the mobile studio in another post.) 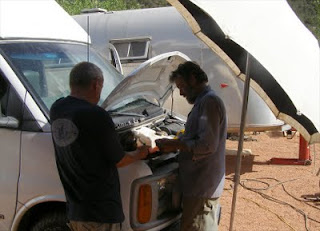 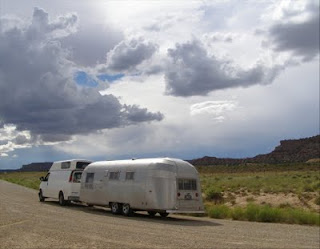 Finally ready to roll.
﻿﻿By now it’s the beginning of August and we wanted to be in Salida, Colorado by the 8th to attend the Rocky Mountain Vintage Rally hosted by a club in Denver. We had Moonshadow roadworthy only hours before our departure deadline. 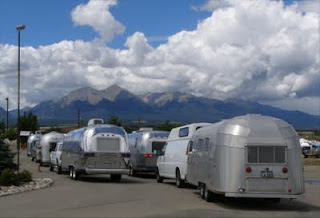 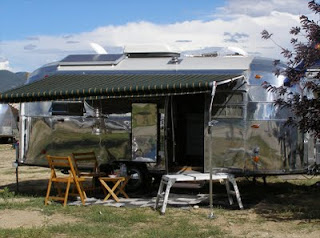 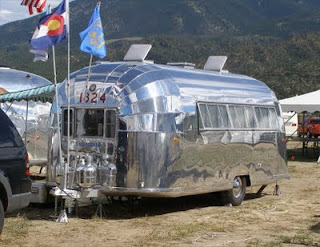 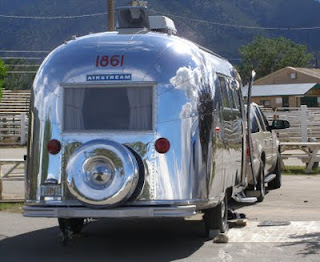 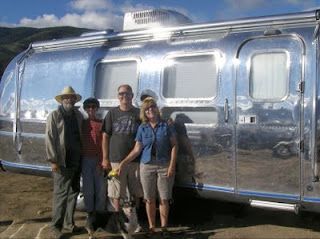 Our rally neighbors, Duane & Cheryl Ferguson with dog Buddy
& their 1976 Caravaner
We had a fabulous time, met some great people, learned a lot and even got a polishing demo by Rob Davis done on our own Moonshadow. Watch this video, it’s almost as though, after 55 years, we get a peek into the hidden soul of our trailer.
Our Airstream is still usable even though it needs a full restoration from the frame up. It is in original condition. As the guys on the VAP (Vintage Airstream Podcast) say, trailers like ours are survivors. Our plan is to do the outside cosmetic work and window restoration first while we enjoy a few more trips. We’ll then dive into it deep and serious towards the end of this year. 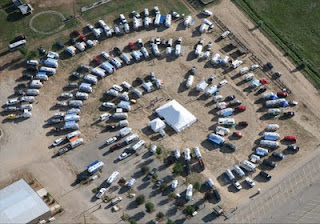