The Cassiar Hwy to Lake Louise and back to the U.S. 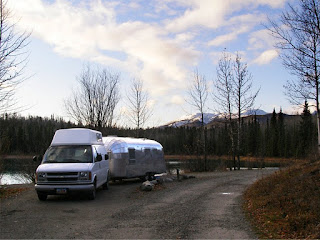 It was about 34 degrees when we awoke at Boya Lake after a night of rain. Frost was on the picnic table and the van windshield. Boya Lake was so beautiful, in another season we would have stayed a week, but we felt a need to be on our way down the Cassiar-Stewart (hwy 37) then eastward on the Yellowhead (hwy 16) to Jasper and Banff National Parks. We packed up to head further south with hopes of leaving behind the cold, gray of winter and rediscovering autumn gold. We had many miles to go. 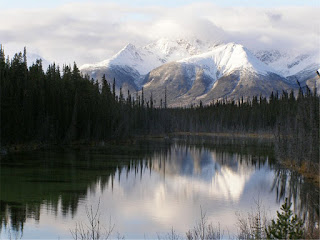 Scenery along the Cassiar stretch was especially beautiful. 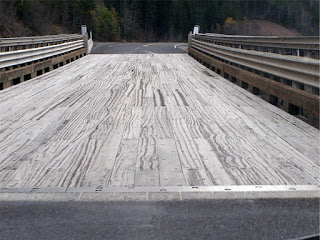 We saw many wood planked bridges in this region of British Columbia. We were curious to know why this material was used in such an ice-prone area instead of the steel grating we saw in other regions of the north. We never found out, so if anyone has the answer, let us know. 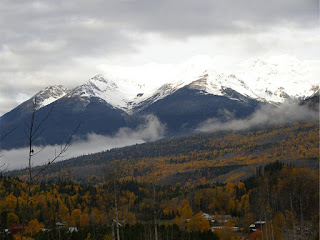 Mile by mile the landscape grew more colorful. Aspen and roadside willows in orange and yellow, fireweed foliage a brilliant red.  There were even late season wildflowers in bloom.
We saw black bears munching on swaths of green grass. 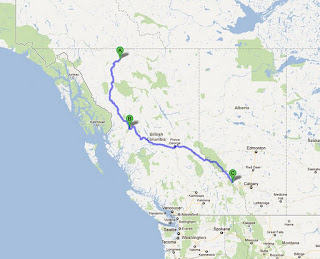 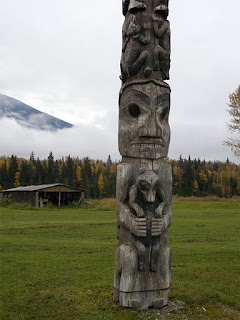 After a night boondocking roadside, we woke to dense morning fog. As we drove, the day continued overcast and damp. The Milepost guidebook informed us this region along the Stewart Hwy is totem pole country. Many Native villages have old totem poles still in place. We hoped to see some but time and weather conditions did not incline us to explore side roads. We were glad to come upon the Native reserve of Gitwangak, at the intersection with Yellowhead Hwy. Here the poles have been removed from original sites and gathered together in a row.

The word totem is derived from the Ojibwe word odoodem, meaning “kinship group.” Totem poles are like signposts, telling stories and honoring heritage, their symbols primarily representing the clans each pole belongs to. Usually carved of cedar or spruce, poles were traditionally painted in black, red, brown and blue-green, using paint made of charcoal, cinnabar, iron oxide and copper oxide mixed with oil from salmon eggs. The poles are typically not maintained or restored. It is generally believed the deterioration of poles is representative of natural processes of decay and death. 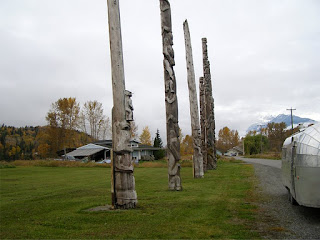 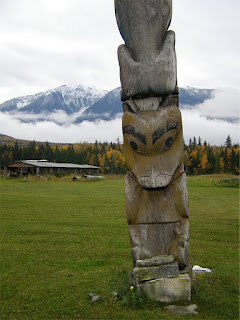 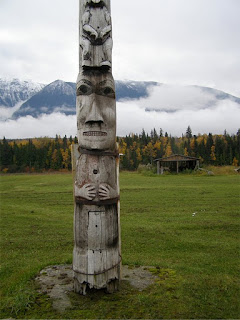 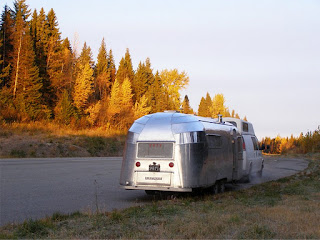 Another night of boondocking roadside. We woke to a sunny morning. 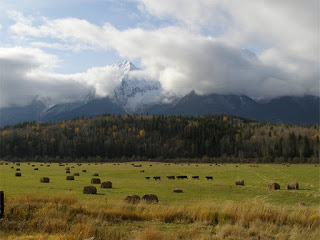 As we travel eastward we return to “civilized” agricultural areas in the broad valleys of British Columbia. 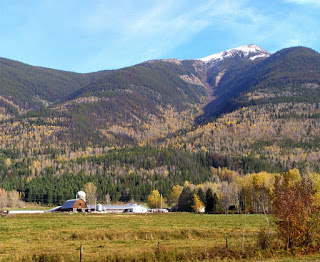 A classic BC farm scene. Would make a good painting. 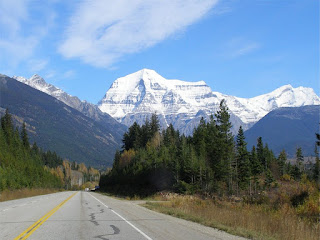 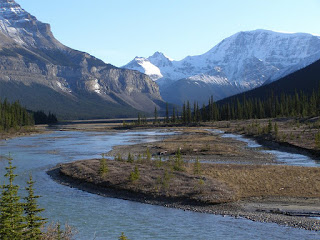 Going south from the town of Jasper we drove the 230km long Ice Fields Parkway, noted for passing within viewing distance of seven icefields (large upland glaciers) and about 25 smaller but notable glaciers. We then entered Banff National Park where we planned to stay at the Lake Louise campground. 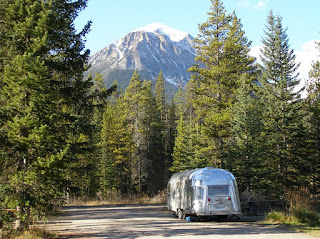 It was dark and very cold by the time we reached Lake Louise campground. We were grateful to find electric hook-ups available though no water and no winter rate reduction. (Spike's U.S. National Park geezer pass did not help in Canada) however, hot showers and flush toilets in a heated restroom was a plus. We stayed two nights. 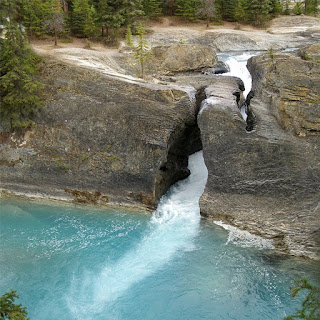 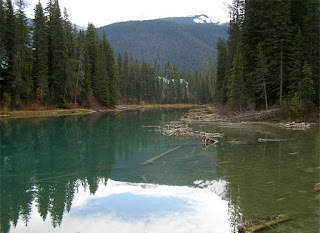 Though the day felt gloomy with overcast, such subdued light reveals interesting reflections in water such as these here at Emerald Lake in Yoho National Park. In this region six national parks are clustered close together, Jasper, Banff, Yoho, Kootenay, Glacier and Mt.Revelstoke. The $19.60 daily National Park pass is good for all six. Unfortunately, in October most side roads, campgrounds and other facilities were closed. 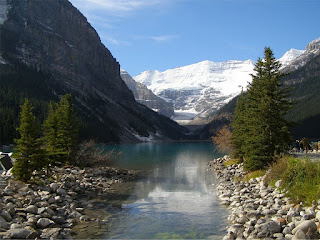 A bit of sun breaks through at picturesque Lake Louise the morning of our departure. 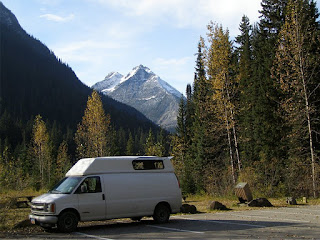 We moved camp to the town of Golden, near (Canadian) Glacier National Park. We found a nice municipal campground right in town. In between spells of rain and fog, Spike ventured forth in his mobile-studio to paint near Roger's Pass. “If the windows are open, it's plein-air!” 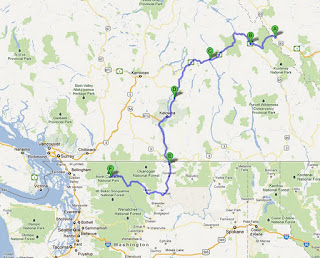 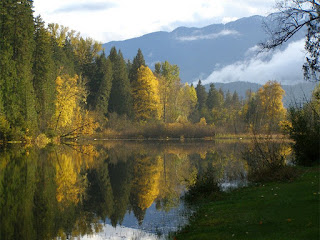 After two nights in Golden we moved on to the city of Revelstoke where again, we found a nice municipal campground next to this beautiful small lake. 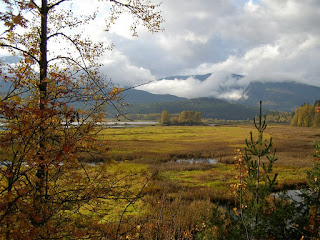 Late afternoon view of wetlands along the Columbia River.

The next day we were ousted by a city worker due to seasonal closing of the municipal campground. He suggested we move a short distance to a parking area next to the city ballfields, a beautiful spot beside the Columbia River. Once comfortably parked we noticed a sign saying no camping but we determined we were not “camping,” just parking overnight. No one seemed to object. 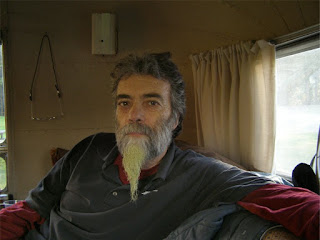 It was raining on us nearly everyday at this point. We felt perpetually wet. Just like the trees, Spike sprouted a bit of witch's hair lichen on his face! LOL. 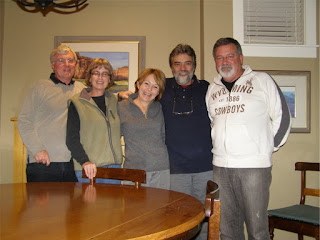 We took a welcome break from Airstream-living while visiting friends, Paul and Glenys Schorn, a couple we met 17 years ago on an Escalante Canyon back-country expedition. They have stopped by to see us in Utah a few times over the years. This was our fist opportunity to visit them at their beautiful home in a resort community near Vernon, BC. It's a gorgeous area of rolling hills and mixed vegetation similar to the wine country of California, and, in fact, it is called Canada's wine country.

Our first evening there, neighbors Ron and Barbara were invited over for “nibbles” and wine. It was a fun evening of lively conversation and lots of laughter. 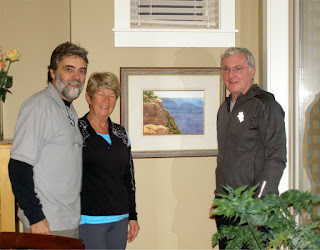 Spike, Glenys and Paul with a painting by Spike. The Schorns are great art appreciators and supporters of living artists. Their home is filled with an eclectic collection of art and artifacts from their world travels.

Note to friend Roger: remember the Grand Canyon painting that you saw on Spike's website and wanted to buy, but Spike couldn't find it? Here it is! Paul and Glenys bought it last time they visited us in Utah. Mystery solved. 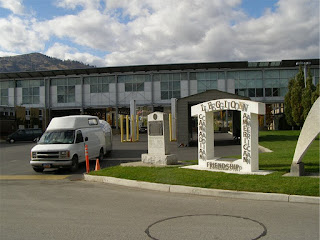 After a wonderful two days spent with the Schorns, we were on our way again. Midday we made our last international border crossing of the trip. After a quick inspection of van and Moonshadow, U.S. Customs confiscated half a lemon and two limp green onions. 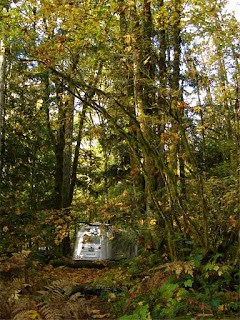 A friend suggested we visit North Cascades National Park in Washington state. Since it was right on our route west to the coast, we made it our next stop. Along the way we drove through gorgeous forests of spruce, pines and golden larch. We encountered light snowfall on the summits and drizzling rain below. Campground after campground was closed for the season. It was dark by the time we found the one camp still open. We didn't even bother to level the Airstream, just ate dinner and went to sleep. In the morning we discovered ourselves nearly swallowed up in a Disneyesque enchanted forest where you'd expect some magical creature to appear from behind a moss covered tree at any moment. 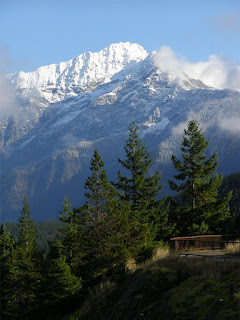 We had a sunny day to explore the beauty of North Cascades National Park. 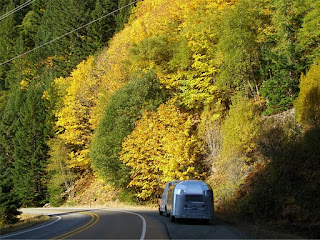 Autumn color was at its peak in this area. 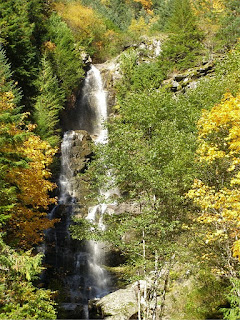 One of many cascades in the Cascades.

From here we continued directly west heading for an area north of Seattle where we planned to visit friends and meet with, for the first time, another vintage Airstream lover who owns “Island Girl” a 1957 Caravanner.