After our week of teaching we sought R&R at Chena Hot Springs north of Fairbanks, a great place for soaking in a naturally hot outdoor pool while moose and grizzlies lurk in the forest.


We then headed south to Denali National Park, location of the highest peak in North America, 20,320 foot Mt.McKinley/Denali. Officially named Mt.McKinley, the peak was originally called Denali, “The High One,” by native Athabascan speakers. Most Alaskans refer to it as Denali. On a clear day the huge mountain can be seen from Fairbanks, 200 miles away, and we did see it a couple of times while there. Now we wanted to see it up close.

Denali NP officially closes September 15th but they keep one campground open, without water or t.p. in the outhouses, and allow vehicles to drive in the first 29 miles as long as the road is clear of snow. 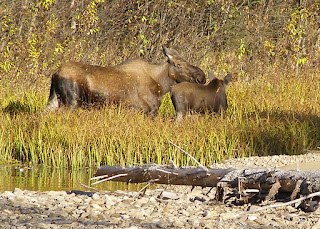 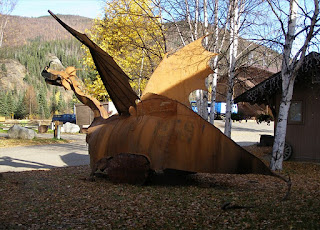 What a surprise to find Puff the Magic Dragon hiding in semi-retirement.
He’s looking old and rusty but is still working hard at heating up
the water for the hot springs. 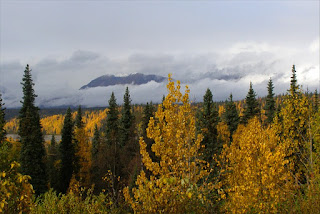 We have heard that only 30-40% of visitors to Denali NP ever see “The Mountain.” This is due to frequent cloud cover, especially during the summer months. We arrived on a stormy day and began the scenic drive into a quickly shifting, misty, cloud-wrapped array of dramatic mountain and valley landscape. 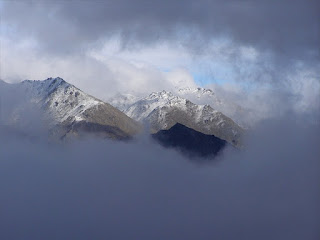 Clouds parted to reveal a snowy peak lighted magically by the sun. It was not Denali but some other mountain of the Alaska Range. Sometimes stormy days such as this can be more beautiful than clear skies. 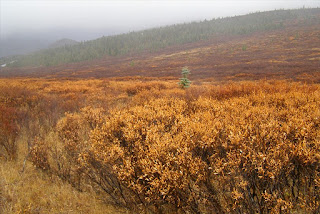 In the valley and lower slopes the colorful carpet of low-growing vegetation is a mix of dwarf birch, blueberry, a variety of willow species, fireweed, and higher up the slopes myriad highland plants including lichens and mosses. All were turning color as the days grew colder. Now past their peak, autumn colors seemed enhanced by the fresh rain. 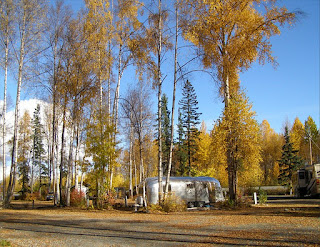 Talkeetna Camper Park – a nice, clean, full service park at a reasonable price. With free wifi and laundry facilities, we were all set for a three day stay.  Talkeetna is a little town of around 850 people. It lies south of Denali at the dead-end of a 14 mile road, next to the Talkeetna River. We heard it was a promising location for great views of Denali

The town began in 1896 as a trading post and riverboat supply base. It is now the jumping-off point for mountain climbing expeditions. The citizenry and overall feel of the place reminded us of Moab, Utah and Taos, New Mexico as they were in the 1970s. We saw lots of bearded men with dreadlocks and big dogs, burly mountain women and other assorted oddballs. In spite of its small population, Talkeetna has its own micro-brewery and NPR station, as well as a nice used bookstore and bead shop. 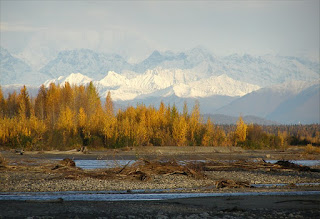 Walking around Talkeetna the first day we were not sure where the great view point was to be found. The town is surrounded by big cottonwoods. A helpful shopkeeper gave us directions to the river where everyone goes for the best sightings. “My husband and I saw the peak there an hour ago,” she said, so we hurried on foot down the road to the riverbank. We could see snow covered peaks with heavy clouds above but didn’t really know which way to look for Denali. The entire Alaska Range is 600 miles long; the National Park encompasses 6 million acres. Here we are seeing some of the peaks that lie below “The High One.” 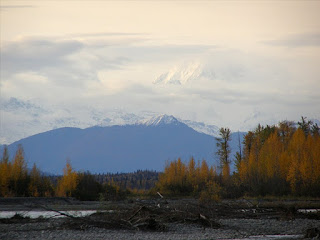 The next day we saw this vision of a humongous, glowing white mountain floating in the sky. This is Denali, much larger than we had imagined.  Denali’s 18,000 ft. vertical gain from its base is greater than that of Mt. Everest. It is truly breathtaking to see. We now understand why a sighting of this peak is the Holy Grail sought by park visitors. 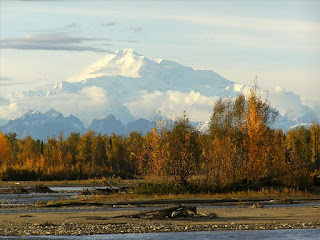 Later in the day the sky cleared a bit more and the peak revealed itself. 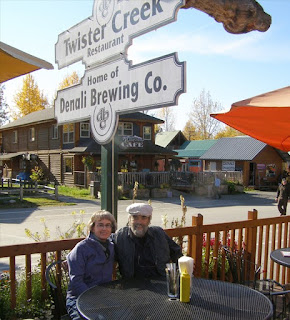 We celebrate a successful sighting and a great time in Talkeetna
with some of the local brew. 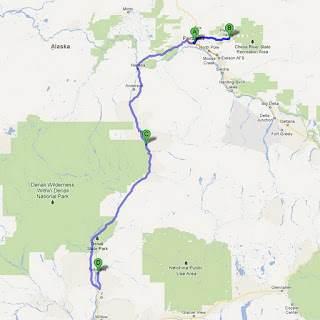